Vegas with Some Radish

Vegas with Some Radish

35:29
"Vegas with Some Radish" is the sixth episode of the third season of Lucifer.

"When Lucifer discovers his ex-wife, Candy, has gone missing, he hightails it to Las Vegas with Ella in tow. Together, the two of them work to find her, but interesting secrets are revealed along the way that could compromise the investigation. Meanwhile, Chloe is upset that Lucifer left on her birthday, so Linda tries to lift her spirits."[1]

During a station house birthday party for Chloe, Lucifer’s phone rings. It seems his imitation ex, Candy (Lindsay Gort) is missing. He stops as Ella enters, and she invites herself along to solve the case. Lucifer and Ella rush off, leaving a stunned Chloe behind. When Lucifer and Ella arrive in Vegas, they find an active crime scene a dead body face down in a hotel room. The first assumption is that they have found Candy, but Lucifer notes the body's dainty little feet with pleasure, Candy’s feet are boats.

Lucifer and Ella do some fast talking as the investigating detective notices them, and it becomes clear that the LVPD doesn’t realize that the body isn’t Candy. So now the question is, who would want Candy dead? He recalls when they first met, and remembers Candy had problems with a loanshark named Louie. However, when they pay Louie a visit, it appears someone beat them there, Louis is dead, and as they go through the the house, it seems the murderer staged the crime scene to look like a suicide. Ella has to wonder if Candy is a suspect. Lucifer and Ella hit then the casino. They make a nice run at the blackjack table, but are soon stopped by security. It seems Ella possesses an infamous ability to count cards, and had been banned previously. Upon leaving, Lucifer is halted by a woman in a wig - it's Candy. She said the dead woman was a friend who was staying with her.

Upon finding her dead, Candy dove into an investigation, keeping herself in disguise to find out who wanted to kill her. They decide since all that was taken after the murder was the deed to the club, it has to do with her business, Fletchers. Lucifer ponts out their marriage has not yetbeen annuled, so as husband would inheret, so they set him up as 'new management' and he makes a flambouant entry doing the stage show himself with Ella disgused as a showgirl, while Candy scans the crowd. Nothing turns up until quite late, and Lucifer realizes, that the good bartender is the bad guy.

He shoots at the 'new owner' but can’t kill Lucifer. When Candy suddenly appears across from him, reflected in a mirror, he cries, “I killed you!” Then Ella fires, taking the man down. As things wind down, Ella flirts with the LVPD detective, and Lucifer talks with Candy. She sends him back to LA to make sure he doesn't mess things up with Chloe.

Left behind in LA, the confused and disappointed Chloe heads over to pay Linda (Rachael Harris) a visit, spilling her feelings to the therapist: “It’s my birthday!” The pair then head over to Lucifer's place. Chloe is disappointed to see Lucifer isn't there, that he did go out of town on her birthday. They decide they are going to celebrate anyway in a place with the best views in the city. A great deal of drinking is occuring and Chloe looks up after throwing back a drink, they should go through Lucifer’s sock drawer! The mood changes, however, when Linda answers a call from Lucifer. He is open with the fact that he is in Vegas… which angers Chloe. The women refocus when they stumble on Lucifer's safe, and after determining the combination isn't 666, enlist Dan to held with a safecracking job. When they actually damage the wall, Dan runs off to get some spackle, and a weepy Chloe tells Linda she isn't jealous but struggling with her feelings.

When Lucifer finally arrives, he's taken aback by the mess, amused by Linda and Dan passed out on the couch, saying he's sorry he missed it, and moved by the site of Chloe asleep in his bed. He sits and confesses that he had left for Vegas for a good reason, but the last time he'd gone, it resulted in ill feeling he didn't want to dredge up, and since he never wanted to lie to her, he didn't tell Chloe. Her back to him, she is shown to be awake and listening to him.

He then spots the obvious attempts on the safe and opens it as Chloe sits up, and he presents her with her birthday gift; he had gold plated the bullet she had once shot him with, saying since it was unlikely he'd ever penetrate her, best to commemorate the time she did him. She laughs and hugs him. 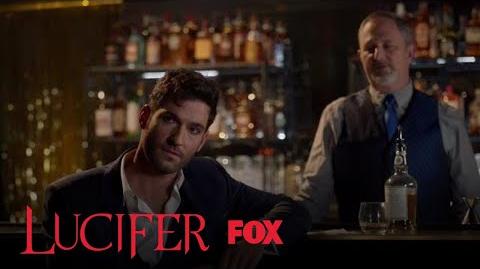