The Angel of San Bernardino

"The Angel of San Bernardino" is twentieth episode of the third season of Lucifer.

"Lucifer and Chloe investigate a murder during which a witness claims a winged guardian angel saved her life, causing Lucifer to become paranoid about his own actions. Meanwhile, Pierce and Chloe's relationship takes an interesting turn and Lucifer discovers something that could change everything."[1]

A news story surfaces of a guardian angel rescuing a victim in San Bernardino, leading Lucifer to wonder if he’s responsible. Pierce's relationship with Chloe is strained by her refusal to let him meet Trixie. Linda suggests that Lucifer may not be aware of his actions because he is unconsciously trying to distract himself; both he and Amenadiel suspect that God is responsible. Chloe finds a video of a fight involving the victim, which leads them to an actor who was hired to keep him from breaking his addiction to heroin. Lucifer's refusal to sleep interferes with his work. Lucifer forces the murderer to confess, but realizes his situation is similar and believes that Pierce is behind the "guardian angel" plan to keep him away from Chloe. Maze reveals that she's the "guardian angel". Pierce wants Chloe to say "I love you" in hopes of removing the mark. Chloe is about to tell him she loves him but he stops her and breaks up, breaking her heart. Furious, Lucifer attacks Pierce. Pierce admits he has had a change of heart. He does not fight, allowing Lucifer to hurt him, but Lucifer realizes the mark has vanished, rendering Pierce mortal.

Lucifer: No offense, brother, but on the list of things I'd like to wake up to, your face falls somewhere after a horse's head and Coldplay tickets.

Lucifer: So what have we got, Booth?
Chloe: Booth?
Lucifer: Yes, the FBI agent on Bones.
Chloe: The TV show?
Lucifer: Uh-huh. Watched all 12 seasons. It's riveting stuff. It's like watching a documentary of us. Actually, you're clearly Booth. I'm Bones, obviously.
Chloe: Obviously.
Lucifer: Kevin's autopsy report. Good. Now, I've been thinking, perhaps there was a slight depression on the occipital, or slight fractures to the femur? Did you know there were 206 bones in a human body? Each of them a clue, sometimes twice. And the coccyx is not what it sounds.
Chloe: No coccyx.

Lucifer: (chuckles) Don't even try lying to me. I know you killed Kevin Winstead. And I know you killed that intern at the hospital. Yeah. Burned her body. Only her cranium was left in the smoldering, smoldering ashes. (chuckles)
Chloe: Lucifer, Lucifer. Are you talking about an episode of Bones? Wha? Oh, yes.
Lucifer: Oh, yes, no, I suppose I am, actually. Yes, episode 306. "The Intern in the Incinerator". Yes, of course. You were quite good.
Matt Kessman: Thank you. Thank you. Yeah. Yeah, that wasn't an easy role. 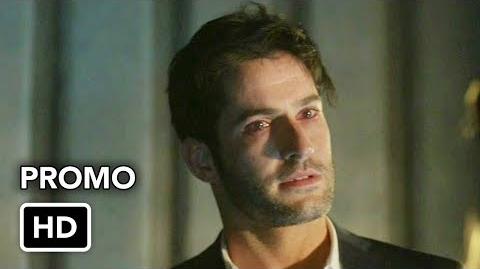 Retrieved from "https://lucifer.fandom.com/wiki/The_Angel_of_San_Bernardino?oldid=42082"
Community content is available under CC-BY-SA unless otherwise noted.