13:50
"Quid Pro Ho" is the tenth episode of the second season of Lucifer.

"Charlotte is determined to get Lucifer to leave Earth by turning Chloe against him. Meanwhile, Amenadiel has begun working as Charlotte's soldier, which makes Maze question his loyalty."[1]

The episode begins immediately following the events of last episode. Lucifer's mum holds a detonator in her hand outside a restaurant, waiting for Chloe to get in her car. She thinks that if she kills Chloe then the impediment holding Lucifer on Earth will be gone, and he can help her get back to Heaven. Amenadiel, however, realizes what she is going to do and arrives and argues against killing Chloe, “...if you kill Chloe, he won't rest until he finds out who did it and when he does, Mom, he will hate you forever...He killed Uriel to protect her.” Mum is confused as to why Chloe is so important to her son and decides she must come up with a subtler way “to end Lucifer's silly crush.”

At his next therapy session, Linda is excited to hear about Lucifer's date with Chloe, calling it a big deal. When Lucifer tries to deflect her questions, she realizes he had chickened out, “Our last breakthrough spooked you, and now you're running scared.” She tells him he is avoiding the truth.

Lucifer arrives at Chloe’s house to offer an explanation for standing her up. Chloe isn't interested, assuming he was with another woman. Penelope Decker enters and is pleased to see Lucifer, calling him thoughtful for being there on such a difficult day. Chloe bets her mother Lucifer has no idea what day it is, and she has to coach him through realizing it is the first day of the trial of her father's killer. Lucifer rolls with that, “That's why I'm here, to support you. Not talk about myself 'cause that would be selfish. So, consider me an emotional jockstrap for the Decker family jewels.”

Ella and Dan arrive at the precinct, Dan is happily whistling and Ella deduces that he got laid. Dan is beside himself, “she is way out of my league. I mean, she is goddess-like. And she came back for seconds.” Ella wonders if this woman sent Dan a mystery package. Upon opening the package, they discover the severed head of Boris Sokolov, the key witness for the prosecution's case against Perry Smith.

In the courtroom Chloe gets word of Sokolov's death, and then the defense attorney arrives - Charlotte Richards. Charlotte refuses to ask for a dismissal, allowing that the if she does not the DA will likely make a fool of himself. The court recesses for lunch, and Lucifer moves to confront mum. She tells him, “if all goes according to plan in that courtroom, you will know...that she doesn't deserve you, because she doesn't care about you like you care about her. You need to see that you're not meant to be together. You belong with your family. Which is why I have to do this.” Lucifer demands to know if she killed Boris, but she said that was just a happy coincidence, but that she had been planning on killing Chloe. Lucifer is furious, his eyes flashing red, “Mother, I swear, if you hurt her, I will rip... Just promise me that you won't touch her.” Now that he knows her plan, he makes one of his own. Back at the precinct, Dan discovers the defense attorney is Charlotte, making him very uncomfortable. Ella reveals that Boris had swine DNA traces on his body and knows the one butcher in town that sells that breed's meat. Dan admits to Ella that Charlotte was the woman he had slept with and that he is getting the feeling he is being used. They head to the butcher and talk to someone about Boris, they are told a big Asian man demanded access to the machinery after hours, and was given it. They were given a description of a distinctive scar on his neck.

In the courtroom, Lucifer is called by the prosecution, “Off I go to shield you from that Quid Pro Ho, Detective.” Lucifer testifies as to the sting he and Dan perpetrated to get to Boris previously. His performance charms the jury and the judge, and he sings Chloe's praises. Charlotte declines to cross examine the witness.

Across town, Amenadiel arrives at Chloe's to search for the bomb mum left in her car. Maze finds him and they talk, she baiting him, she had found the bomb. She tell him to tell his mom no one will be hurting Chloe on her watch, then sets off the bomb blowing up his car. He then makes his way to Linda's, still holding the steering wheel destroyed car, saying he can’t understand why is Maze mad at him. Linda says it's because he lied, and he should “apologize your ass off.”

In the courtroom, Charlotte recalls Mr. Morningstar to the stand. She asks him who was first on the scene, and when he replies Chloe, she has him read the official report that has Dan as first on the scene. Lucifer tries to save the situation, saying Chloe was impeccable at her job, and “That's why she took herself off the investigation immediately.” Charlotte then suggest Chloe had motive and opportunity to commit the murder, unless Lucifer was lying. Lucifer is not happy with his mum, “What you're implying is preposterous. The Detective would never hurt anyone. But yes, what I said is the truth. Under oath or otherwise, I don't lie.”

During the next recess Chloe accused Lucifer of having leaked information to Charlotte who would never asked who was first on scene if she hadn't known the answer. At the same time, Dan confronts Charlotte, and asks if she slept with him to get intel on the case. She freely admits she did, and that she went through his phone once he fell asleep.

Lucifer retreats to Lux and talks with Maze, frustrated Lucifer can’t understand how Chloe could think he would betray her to Charlotte, and wonders who did. She casts a knowing glance at Dan as he walks into the club. He shows Lucifer the brand described by the butcher, and he recognizes it immediately, and the trio depart for the Triad base at a cultural center, all the way there Maze drops innuendo about Dan and Charlotte, just outside the door he tumbles to the fact she knows, then admits that Charlotte scammed the inside info from him after they had sex. Lucifer is appalled, “You slept with my Mu-arlotte? You bastard!” Lucifer tackles Dan, sending the two men through the paper wall of the center. As they look up, everybody in the building surrounds them, guns drawn.

Lucifer shakes himself off and says he'll deal with the situation, When he begins speaking in Chinese, Dan is stunned. Lucifer responds, “I'm the Devil. Of course I speak Chinese. I speak everything.” He makes a deal, “Madame Li is going give us the man who killed Boris. All we have to do is defeat Kang....Much as I'd like to see Crouching Tiger, Hidden Douche, I'd actually like to win this,” and he sends Maze against Kang. Maze is delighted, and after a fairly short battle she has him with his own swords at his neck. Lucifer calls her off before she can decapitate him, much to her disappointment, but he points out she won his swords. Li give Lucifer the address as promised and he and Dan set off to follow it up.

Meanwhile, at the courthouse Chloe speaks to her mom, worrying that her actions might lead to her father's killer going free. Penelope tells her she is a pro and that her father was proud of her. When Charlotte interrupts them, Penelope asks if she is a mother, when she says yes, Penelope tells her, “Then shame on you.” Charlotte then takes Chloe aside and offers her a deal, she will manipulate events so that her client goes to jail, but there is a condition, “You'd have to betray Lucifer, so, you want Perry to go to jail, call Lucifer a liar.”

Dan and Lucifer, meanwhile, track down the address Li gave them, Dan desperately says he would do anything to put things right, Lucifer says he knows that. The rush the room, and find what remained of Boris as well as his assassin, Yung, “Perry hired him to go behind the Triad's back to kill Boris, knowing that they'd punish him for it.” Dan calls Chloe with the bad news.

Lucifer is in the courtroom by the time Charlotte calls Chloe to the stand. She causes Lucifer's mum to choke on her water when she says in open court, “if you believe his claims that he used to run Hell...then yes, he's accustomed to punishing bad guys.” Charlotte then tries to corner Chloe, forcing her to say Lucifer is a liar, instead she looks at him and says, “Lucifer is the best partner I have ever had. And I can only hope that he can count on me as much as I count on him.” The trial, unfortunately ends in a not guilty verdict.

Amenadiel heads to Chloe's to talk to Maze where he meets Penelope. He recognizes her as a woman he met over thirty years previously. Maze, however is with Dan. They are setting up Perry, Dan tells him, “You see, the Russians, they don't like it when one of their own is taken out without permission.” He then gets in the car with Maze as a van pulls up and drags Perry in.

Chloe arrives at the penthouse just as Lucifer is about to leave. He holds up the sack he is carrying and says he owes her dinner. They sit on the balcony and share a more intimate dinner than they had to date.

Amenadiel meets with his mother and tells her Penelope Decker is the woman he blessed 35 years ago on instructions from Dad, “Father, He asked me to come down here to bless a couple who was unable to have a child. He had never asked me to do anything of this sort, and He never did again.” His mother says, “We're going home, son. And Chloe is the Key.” 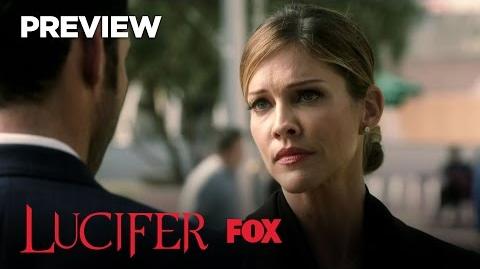 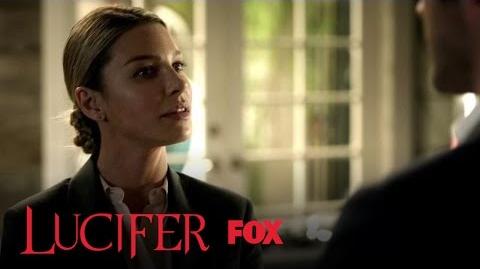 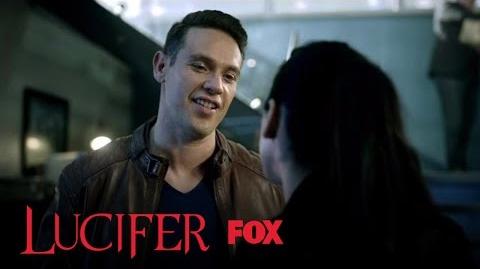 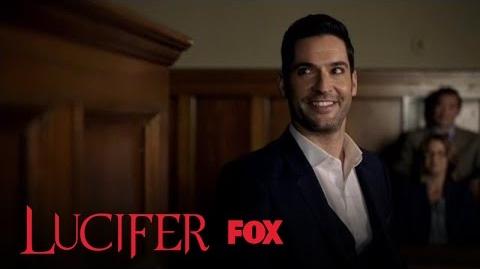 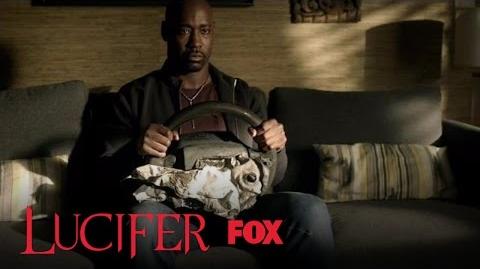 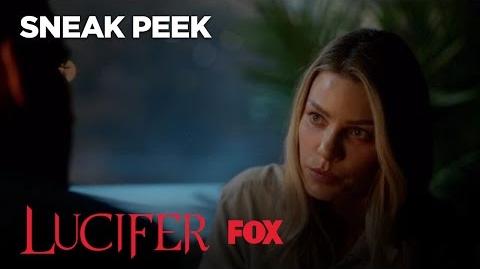