The Pentecostal Coin was a powerful mystical object that allowed one to travel to or from Hell. The coin could only be used once. Lucifer was frequently seen spinning the coin as he levitated it. Lucifer comparingly calls it "a sort of subway token for the damned".

Both sides of the coin have "Morning Star" written at the bottom, an allusion to the name Lucifer was called by his mother. One side has "In God We Trust" on the top, while the other side states "In God We're Damned". On the "Trust" side, the coin has an image of the crucifixion of Jesus within a triangle. The three sides of the triangle are labeled "Father", "Son", and "Holy Spirit". On the "Damned" side, the coin has a goat head within a star. Surrounding the star, five words are written: "Beelzebub", "Serpent", "Dragon", "Satan", and "Lucifer".

In "Wingman", Lucifer showed the coin to gain access to the auction in order to find his wings.

In "St. Lucifer", it was given to Malcolm Graham by Lucifer in exchange for not shooting him because Lucifer thought he became mortal and vulnerable, and Lucifer was by that time still unaware that being within 100 feet of Chloe Decker made him vulnerable to physical harm. Lucifer thought that he had utterly lost his immortality, invulnerability and indestructibility. It was revealed that Lucifer was going to use it in order to return to Hell, but it could also be used by the damned to get out of Hell.

In "Take Me Back to Hell", Malcolm gloats over a dying Lucifer with the coin. Once Lucifer was revived, he punched Malcolm in the face right before Chloe was able to grab a gun and shoot Malcolm in the chest four times. As Malcolm laid on the ground dying and trying to reach for the missing coin that was supposed to be in his pocket, Lucifer revealed that God wanted him back on Earth and returned the coin to Lucifer. Lucifer then flipped the coin in the air to Malcolm and right before Malcolm was able to reach for it, the coin burned up and disintegrated. Lucifer then crouched down and said to Malcolm that he was sorry and that the coin was one use only.

In "Once Upon a Time", which takes place in an alternate universe where Chloe's father did not die, Lucifer still possesses the coin. 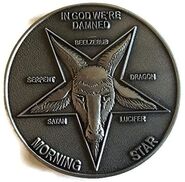 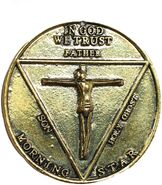