Edit
watch 01:32
She-Hulk Trailer Dropped - The Loop
Do you like this video?
Play Sound

6:27
"Off the Record" is the seventh episode of the third season of Lucifer.

"A reporter seeks revenge after he discovers that Lucifer has been sleeping with his estranged wife. However, when it's revealed that Linda is the reporter's estranged wife, things get messy. Lucifer's reputation and safety are on the line, especially when a serial killer from the past resurfaces."[1]

Linda 's ex-husband, Reese Getty, wakes up in a hospital. He asks a nurse if his wife has visited but is informed that she hasn't. Nevertheless, Reese remains optimistic that he can fix things with Linda. However, once he is recovered, he goes to take her flowers only to hear her having sex with another man. Reese waits and hides and sees Lucifer leave.

Enraged, Reese tails him to Lux where he is confronted by Lucifer. Reese mentions that he wants to get revenge on the man who's sleeping with his wife, and is egged on by Lucifer, who does not realise that this man is, indeed, himself.

Reese digs up dirt on Lucifer and begins a story focusing on Lucifer, at the LA Telegraph, where he is a Pulitzer-prize winning reporter. He tails Lucifer and Chloe on their investigations, claiming that he is writing a story on their partnership when he is in fact planning an expose of Lucifer. He discovers more than he bargained for, however, namely, that Lucifer is not just a shady character or involved in illegal dealings but the actual devil. He rushes this information to Linda, who does not believe him, as she does not yet know the truth.

After months of completely shuttering himself in to work on his story, Reese realises that there is a way to prove to Linda that Lucifer is the Devil. He barges in on Lucifer and Linda during a therapy session, and shoots Lucifer. Lucifer is unharmed but remarks that it is "lucky" that Chloe isn't there otherwise he would have bled. Linda reveals to Reese that she now knows of Lucifer's identity and that she believes that Lucifer is a good man.

Heartbroken, Reese goes back to his office and angril tears at all the evidence about Lucifer that he has spent the last few months collecting. After calming down a little, he realizes that Chloe makes Lucifer vulnerable.

Desperate, Reese hires a known serial killer, Kavitsky, to poison Lucifer at Lux in the presence of Chloe. However, Lucifer's charming manner puts Kavitsky off guard and an innocent girl is killed instead. Reese confronts Lucifer, blaming him for the girl's death. Lucifer reveals that he has no sway over people's decisions, to which Reese asks him how he could make Linda like him. Lucifer speculates that it is because he told her the truth.

Reese goes to Linda and admits his faults in their separation, but when it is not enough for Linda to love him again, he gets angry and accidentally hurts Linda. He admits to her his part in the poisoning of the girl at Lux and apologies. He tells Linda that he will be at his office and leaves her to call the police.

When Reese gets to his office, he takes a drink from the glass of water that is on his desk, not knowing that it is poison. Kavitsky appears and Reese grabs him, knowing that the LAPD are minutes away. Sure enough, Chloe and Lucifer arrive and arrest Kavitsky. As Reese dies from the poison, he tells Lucifer that his helping arrest Kavitsky will make things right with Linda and maybe she will finally love him again. Lucifer looks at him sympathetically.

Reese wakes up in the same hospital that he awoke from before, and asks the same nurse the same question about his wife. He is revealed to be in his own Hell, reliving the same moments over and over again. 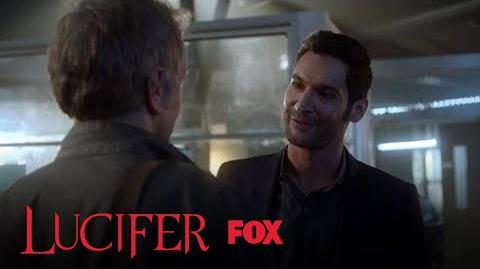 A Journalist Asks To Write A Story About Lucifer Season 3 Ep. 7 LUCIFER