When a movie star's son is killed after being chased by paparazzi, Chloe takes a hard look into the case with a little help from Lucifer.

While walking down the street, Lucifer comes across a street preacher, and replies when the con man mentions the Devil. Soon, the preacher speaks to Lucifer and asks him to leave, saying to do his own shtick elsewhere. Lucifer hates a charlatan, and suggests that the problem is that the preacher is not a believer, he says that he will make him a believer and offers a glimpse of his devil face. The con man flees in fear.

Lucifer attends first therapy session with Linda Martin, where he tells her that he is the devil but she takes it as a metaphor.

Later, Chloe is lurking at Lux, observing Lucifer. She approaches him after Maze gives her a drink, informing her that Lucifer knows she is there. Chloe tries to discover what Lucifer's "secret" is, wondering how he could have survived being shot by Jimmy Barnes. A phone call interrupts their conversation and Chloe takes it; obviously affected by the call, intriguing Lucifer.

Chloe meets Dan at a crime scene; the son of a celebrity has been run off the road by a paparazzo with whom Chloe is familiar. Lucifer shows up at the crime scene and, ignoring Chloe's initial protests, questions the paparazzo, Nick Hofmeister. However, Dan interrupts them before they can get any clear answers.

The next day, Lucifer visits Chloe at home and asks her about her history with Nick, but she kicks him out. Undeterred, Lucifer visits Nick in his holding cell, hoping to learn "sexy salacious details" but instead is told Nick had crashed Chloe's father's funeral in order to get a shot of the new starlet, Chloe, grieving.

After finding out about Lucifer's visit to Nick, Chloe goes to Lux and reprimands him. Lucifer tells her that he learned that Nick is protecting someone and Chloe realizes that it is probably the same person who has been posting photos online from Nick's company. She realizes that the latest photo was from a party that is still happening and she and Lucifer leave to investigate.

There are numerous paparazzi outside the party, but Lucifer soon recognizes one who was also taking pictures of the crime scene the day before. He and Chloe try to approach the suspect but he escapes after pointing out "Penelope Decher's daughter", causing all the other paparazzi to surround them.

The next day, Dan runs the number plate of the suspect's car and gives Chloe his details location. She and Lucifer find the suspect, whose name is Josh Bryant, and Lucifer asks him what he desires. Josh replies that he wants to "always be first".

Chloe and Lucifer return to Lux, where they look through Josh's past photographs, which include gruesome depiction of celebrity deaths. Chloe speculates that Josh may have caused these deaths to be able to reap the rewards of having the first photos of them. Lucifer wants to punish Josh, but Chloe insists that they need more than just circumstantial evidence. Annoyed, Lucifer decides to deliver some punishment with Maze instead.

Chloe visits Nick and tells him that she knows about Josh. Nick admits that it was Josh who had been chasing the victim and that he had called him after the "accident", asking for help. Chloe leaves to take a call and when she returns, Nick is gone. She learns from the desk sergeant that Lucifer took him.

Lucifer takes Nick to a deserted street, where they meet Maze who has kidnapped Josh. He then reveals the betrayal of each man, and Maze gives them each a gun to see who will shoot who first. Josh tries to shoot Nick, but his gun is empty. Shocked and hurt, Nick picks up his own gun and points it at Josh. Chloe arrives and tries to convince Nick not to shoot, reminding him that he tried to change and that it is a good thing. Realizing that this punishment was a mistake, Lucifer prays up Amenadiel, who slows time just as Nick fires his gun. Lucifer plucks the bullet out of the air, saving Nick from becoming a murderer. When Amenadiel leaves and time resumes its normal speed, Chloe is shocked to find that Josh has not been shot and Lucifer has moved.

Later, Chloe visits Jimmy Barnes, who is in a mental hospital. She tries to ask him about Lucifer, but Barnes becomes frightened and starts banging his head against the wall, drawing blood. The orderlies arrive and restrain him but he continues to struggle, screaming, "He's the Devil!"

(Josh tries firing his gun, but its empty)
Lucifer: (Laughing) Maze, you fiend. Even I didn't see that one coming. 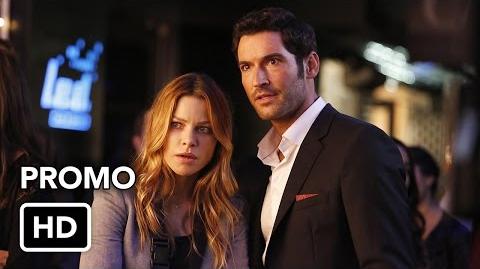 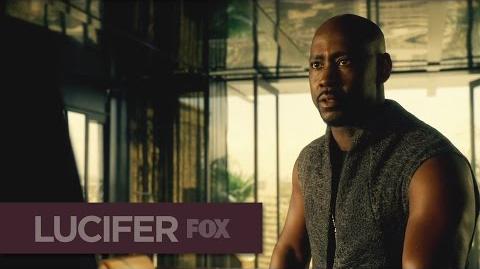 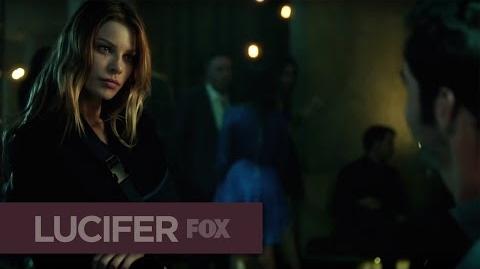 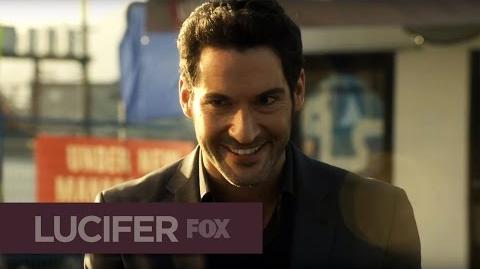 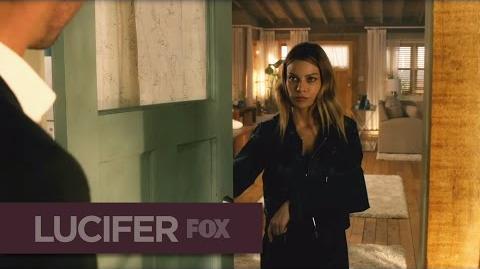