Lucifer's wings are the angel wings of Lucifer Morningstar. Lucifer had Maze cut the wings off, and he later destroyed them. However, at the end of season 2, the wings were restored to him due to Lucifer's new emotional state.

Lucifer retained his wings, even after his fall from grace. However, when he and Maze abandoned Hell, they arrived at a beach in Los Angeles, where Lucifer expressed his hatred towards God by having Maze cut off his wings.

Lucifer put the wings in a secret compartment in his container. In "Favorite Son", the container was stolen by Renny under unknown circumstances. Lucifer retrieved the container, but, unfortunately, he didn't find the wings where they were supposed to be.

In "Wingman", Lucifer discovered the wings Carmen Grant put out for auction were fake, and that Grant kept the real ones. Lucifer rushed to Grant's house and took them.

Lucifer later burnt them in front of Amenadiel, as the angel was the one that had tipped Grant off to steal the wings, in an attempt to encourage him to go back to Hell.

Unknown to Lucifer, Maze kept a small feather belonging to his wings. When Amenadiel was dying from a fatal wound with no hope of survival, Maze revealed the feather to him and used it to heal the wound.

In "The Good, the Bad and the Crispy", after being knocked unconscious, Lucifer awakens in the desert with his wings restored.

In "They're Back, Aren't They?", Lucifer attempts to solve the mystery of the return of his wings. While Amenadiel thinks that God restored Lucifer's wings as a sign of forgiveness, Lucifer comes to the conclusion that God isn't behind it. Instead, after learning of the Sinnerman, Lucifer thinks that "something darker" is behind the return of his wings. Lucifer also discovers that along with regaining his wings, he has lost his "devil face." Lucifer cuts off his wings and they are found by Amenadiel. However, later the wings were back again. Meanwhile, Amenadiel hasn't regained his wings or powers.

In "All About Her", after discovering that Marcus Pierce is in fact Cain, Lucifer theorizes that God restored his wings to make Lucifer stop Pierce from defying God's will. As God has screwed them both over, Lucifer offers to help Pierce defy God by finding a way for Pierce to permanently die.

In "Infernal Guinea Pig", Lucifer uses his wings to fly to Hell, retrieve the soul of Abel and resurrect Abel in the body of a young woman.

During season 4, after Lucifer begins dating Eve again, his wings take on a more demonic bat look, matching with Lucifer's change into his more demonic "King of Hell" form due to the realization that he hates himself. Lucifer doesn't realize this until "Devil Is as Devil Does", having not checked his wings since he got his devil face back in fear of what he might find.

At the end of "Who's da New King of Hell?", Lucifer's wings regain their original angelic look after Lucifer and Chloe admit their love for each other and Lucifer chooses to return to Hell in order to protect those he loves, the wings changing back apparently in response to Lucifer's more selfless and self-sacrificing mentality as well as Chloe's full acceptance of who and what he is. Lucifer then uses his wings to return to Hell so that he can rule there once more and keep the demons in line. Following this, Lucifer's wings retain their original angelic appearance.

In "Is This Really How It's Going To End?!", Lucifer uses his wings to fly to Caleb Mayfield's grave after the murder of Dan Espinoza.

In "A Chance at a Happy Ending", Lucifer uses his wings to battle Michael in midair. After Michael kills Chloe, Lucifer flies to Heaven where Lilith's immortality that he had kept inside of his ring shields him from destruction due to breaking his banishment. However, he arrives in the form of a meteor and his crash creates a crater. By giving Chloe the last of the power in his ring, Lucifer is able to resurrect her while his broken banishment results in Lucifer's destruction. When Lucifer returns as the new God shortly thereafter, he descends from the sky and puts his wings away once he lands.

In "Save the Devil, Save the World", when Lucifer attempts to ascend to the throne in the Silver City, his wings refuse to come out. Chloe suggests that he's self-actualizing with everything that's going on and that his wings aren't coming out because Lucifer doesn't feel ready to become God. In Linda's fake ending to her manuscript, after deciding that he's ready to become God, Lucifer is able to extend his wings and take off in front of Linda, flying into Heaven. After learning that Lucifer purposefully made himself vulnerable so that he could be shot by Rory, Linda realizes that his conscious and subconscious minds are finally acting in concert, making Lucifer realize that he no longer has to let his wings choose whether or not he's going to be God. Lucifer is then able to extend his wings when he tries to again. Choosing not to become God even though he's finally ready to be, Lucifer puts his wings away.

In "Partners 'Til the End", Lucifer briefly uses his wings while battling with Vincent Le Mec's men. 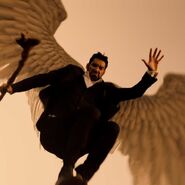