One, Two, Three, Four, Five
Angels are extremely powerful celestial beings that serve God. The majority of angels reside in Heaven, however there are few angels who prefer to live on Earth, such as Lucifer Morningstar and Amenadiel.

Angels are the children of God and Goddess. They were created by God and Goddess before Earth and humanity was created. Angels all grew up together in Heaven. According to Amenadiel, angels were never children, as they were created already fully formed and grown. However, like human children, they played with each other and depended on their parents. Angels are immortal and do not age. Amenadiel is the oldest angel and is admired, feared and respected by many of his siblings.

Lucifer was thought to be God's favorite until he rebelled and corrupted more than half of his siblings. God cast him out of Heaven, condemning him to rule Hell for all eternity. The rest of the angels continued to reside in Heaven and try to act in God's will. In 2011, Lucifer voluntarily abdicated, leaving Hell with no ruler,  but he eventually returned to Hell after a demon rebellion on Earth threatened all his loved ones.

Amenadiel, the firstborn angel who is billions of years old and the "fury of God," he is one of the strongest and most powerful Angels ever created by God. Amenadiel descended to Earth in 2016, 5 years later, to bring Lucifer back to his post, particularly irritated since he had taken over Lucifer's duties patrolling Hell and chasing down escaped souls of the dead.

After failing to keep a deal with God, Uriel came to Earth to collect on Lucifer's end of the deal. Lucifer convinced Amenadiel to meet Uriel to threaten and dissuade him and convince him to go back to Heaven. Realizing Amenadiel no longer had his celestial strength and godly powers, Uriel easily defeated Amenadiel. Infuriated, Lucifer confronts Uriel, who reveals his plan to erase their Mother from existence using Azrael's Blade, the "Flaming Sword" before she takes her vengeance on their father. While Uriel defeats both Lucifer and the demon Mazikeen, Lucifer surprises and stabs Uriel with the Blade, killing him.

At the end of "The Good, the Bad and the Crispy", Lucifer woke up in the desert. Somehow he had regained his wings.

Amenadiel then returns to earth, where he admits to Lucifer that he has become accustomed to living on earth and will stay.

He later learns he has fathered a child with Linda Martin and keeps his angel siblings away from his son Charlie in order for their child to live peacefully on earth as he has.

Angels appear human, albeit with large wings. It is unknown whether this is their true form or simply how they choose to appear when outside of Heaven. Lucifer was the only known angel without wings, having severed them after abandoning Hell, leaving large notable scars on his back. After spending time on Earth and committing various sins, Amenadiel's wings began to stop functioning and decay. However, he regained them when Charlotte Richards died and was able to use them to fly her to Heaven.

Any pattern in the color of their wings is still unknown. Lucifer's enormous wings were shown to be white and to glow with a divine light, while Amenadiel's wings were dark grey (although they did have a bright sheen) before they began to decay, when they lost their sheen and coloration, becoming a dull brown. Uriel's wings are a shade darker than Lucifer's, still white yet with more grey plumage and a slight shade of grey or cream. Remiel's wings are mottled shades of brown and tan, similar to a bird's (which is fitting, since Remiel's personality is centered around being a huntress.) Michael's wings are black.

All angels have the following powers:

Since angels self actualize, some angels have shown to have additional powers that correlates with their personality: 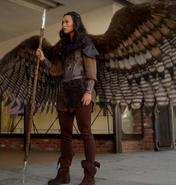 Michael
Add a photo to this gallery
Retrieved from "https://lucifer.fandom.com/wiki/Angel?oldid=42689"
Community content is available under CC-BY-SA unless otherwise noted.