Lucifer Wiki
Register
Don't have an account?
Sign In
Advertisement
in: Episodes, Season 2 episodes, Episodes where Lucifer says the title,
and 2 more
English

A Good Day to Die

A Good Day to Die

20:08
"A Good Day to Die" is the thirteenth episode of the second season of Lucifer.

"Lucifer must find the antidote to the Professor's poison before it kills Chloe. He flies to Hell to find the Professor's soul and get him to turn over the antidote. While he's there, he is forced to confront his guilt about Uriel's death. Mom heads to hell to get Lucifer back, but Lucifer still feels betrayed by his parents because of something he discovers. Eventually mom gets trapped in one of the hell loops, but Lucifer saves her."[1]

As the episode opens, Lucifer is desperately speeding Chloe to the hospital. Chloe points out that the other poisoning victims didn't do too well when sent to the hospital, and wants to find the antidote herself.

They call Ella to meet them at the precinct, and then head to the station to look through the files for any information on the antidote. Ella arrives and Chloe asks about the possibility of there being another of Carlisle's victims, she doesn’t want to tell Ella the truth, thinking she’ll freak out, but Lucifer feels they should loop her in. Ella reveals she found a syringe on the scene of Carlisle's last stand with a little poison in it, so there is a possibility someone was dosed, and found a vial that might have had the antidote, but its contents had been destroyed. Which Ella calls a “dick move” and describes what will happen to the victim while Chloe looks sick.

Lucifer texts his brother and they meet at the precinct. Lucifer is furious about being manipulated by his mother, and demands answers, “Answer me, brother, before I rip your spine out and beat you to death with it.” Amenadiel tells him he had been played by their Father as well, and had no idea what he had done led to Chloe's birth. He further assures his brother that Chloe has no idea, and that they are both on the same side. Lucifer realizes that Amenadiel has no insight into Chloe's poisoning and he cannot help. Chloe interrupts to tell Lucifer she has an idea; she suggests that perhaps Burt (Joe Williamson) who orchestrated the smuggling of the poisons in the previous episode was also smuggling the antidotes. Burt has been released pending trial, and is throwing a party. Chloe bumps into him there, and he remembers her from Kleinberg's beach party. She plays seductress but when they get to his bedroom, her nose starts bleeding which turns him off, so Chloe shoves him through the bedroom door where Lucifer awaits. Lucifer flashes his Devil eyes, and Burt screams. As Lucifer emerges from the bedroom, he promises Chloe he never had to touch Burt, but he hadn't smuggled the antidote. He had been hired, however, through middle man, Dave Maddox. Chloe's bleeding continues, and to Lucifer's great alarm, she passes out.

At the hospital, Dan berates Lucifer, who points out that, “it was much easier to get her here unconscious. You know how stubborn she can get.” Chloe awakens and asks Lucifer how she is supposed to find the antidote if she is stuck in a hospital. Dan assures her they have it covered, and she then asks for Trixie, but worries she might scare her daughter, so asks Lucifer how she looks. Very seriously, he assures her, “you look heaven sent.”

Working together, Dan and Lucifer track down Maddox who has an art gallery displaying his own work, which Lucifer terms “atrocious.” Dan tells him the art is for money laundering and they use the art sales to cover up money transfers. In confronting Maddox, however, Dan blows it, and the two of them are cuffed and taken in the back where they beat Dan. When Lucifer realizes that it wasn't a ploy, he removes his cuffs and halts Maddox in mid-swing. To speed things along he uses his mojo and discovers Maddox wants someone to buy his art, “All I want... more than anything, is just... is to be treated like a real artist.” Lucifer makes the sacrifice, and purchases a painting (which is thereafter seen hanging in front of the safe in his bedroom). Maddox provides a list of ingredients for the antidote, but does not have the formula, “The professor kept the formula all to himself. He liked to brag about how the only place it existed was in his head.”

After a talk with mum, Lucifer realizes he has to go back to Hell to talk with Carlisle. He gathers his celestial troops, and Linda, and makes his proposal; “The plan is simple: you kill me, I go down to Hell, interrogate the professor, get the formula, and then you bring me back.” Mum forbids it, Maze points out he would be alone with no back up and although he was the Lord of Hell, he had been gone a long time. In the end, everyone but mum agrees to help Lucifer who is determined, and they head to the hospital where Lucifer will actually be vulnerable if he is close enough to Chloe. Lucifer sends Ella and Dan off to fetch the ingredients for the antidote, he sets Amenadiel to guard Chloe and not allow anyone to move her, then he Maze and Linda set up in the room below Chloe's with a defibrillator. As Linda and Maze waffle about actually hitting Lucifer with the paddles, he gets fed up and hits himself, stopping his heart and jumping to Hell.

In Hell, he walks the corridors looking for Carlisle's room. When at last he finds it, he enters and confirms for the professor he is indeed in Hell, and that he cannot get out, “Not until you no longer believe you deserve it, and I have never seen anyone pull themselves out of here.” But he suggest the man's guilt might be alleviated if he provides the formula for the antidote. Carlisle desperately writes it out and Lucifer reads it through. When asked if that is enough, Lucifer smiles and says, “You tell me.” Then Carlisle's Hell Loop begins again, and Lucifer leaves the room, griping about the delay in his resurrection. He then hears piano music and follows it to another room; a copy of the penthouse where Uriel is playing the piano. Lucifer tries to apologize, but uncontrollably runs his brother through, time and time again while Uriel chats, reminding his brother he didn’t even follow up on the clue he was given, “The piece is here.” Lucifer thought it was nonsense, but Uriel's last words were a clue and Lucifer has to figure it out for himself. Back on Earth the others are trying to resuscitate Lucifer with no luck.

Maze realizes something has gone wrong, that Lucifer is stuck in Hell and someone has to go and get him. She has no soul so she can't, Linda suggests she go, but then mum enters and says they should send her – Maze can't comply fast enough and Charlotte's body hits the floor.

Upstairs Chloe has taken a turn for the worse and the staff want to move her. Amenadiel blocks all efforts to do so. Back in Hell, Lucifer weeps and apologizes as he stabs Uriel. Mum arrives and tells him he doesn’t belong in Hell and this Uriel isn’t real. Mum tells Lucifer he is not to blame, the fault is hers. She confesses she has been manipulating Lucifer, stoking his anger against his father, “I pushed you and that human closer, knowing it would crush you when you learned the truth.” When she says Chloe’s name, however, Lucifer comes to himself, grabbing the name like a life boat, saying he had to save her then, and he had to save her now. Mum says they should stay, her son is here and they can be a happy family, but Lucifer drags her away from the false Uriel, “Come on. You pulled me out of my guilt, there's no time to get stuck in yours.”

Linda finally revives Lucifer, and Maze revives Charlotte. Lucifer stumbles from the room to find Amenadiel who has kept his promise. The brothers commune without words and Chloe can finally be moved.

Lucifer is at her side when Chloe awakens, pleased to see him. She asks if they can pick up their nascent relationship where they left off, but he hesitates and tells her for now what she must do is feel better. Outside the hospital, mum asks after Chloe and Lucifer brushes her off, when she objects, saying he can trust her, the seething Lucifer responds, “Can I, Mum? You're as bad as He is. Worse, maybe. At least He doesn't pretend to love me.... You set out to break my heart. Well, mission accomplished...I refuse to be caught in the middle any longer. I am tired of being a pawn, so, no more. I'm done.” He walks away as mum calls after him. After her release from the hospital, Chloe is seen trying to get in touch with Lucifer, joking about leaving 337 voice mails after he hadn't picked up or returned any of her calls. She heads to the penthouse, but when she arrives it is dark and deserted, the furniture covered with dust cloths. Her voice breaks as she calls out, “Lucifer?” 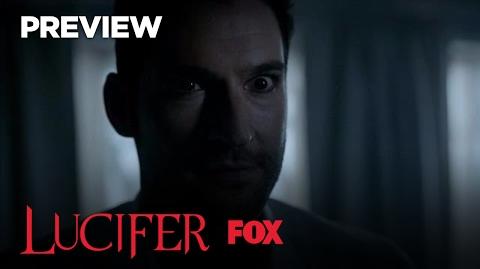 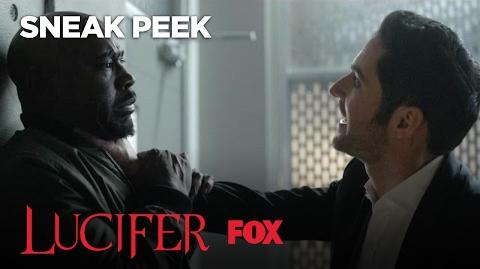 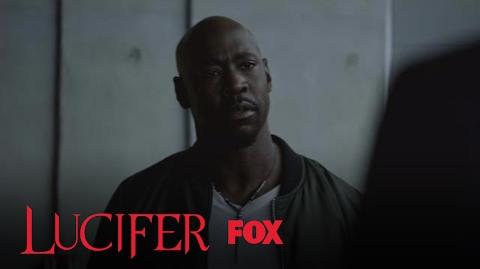 Amenadiel Tells Lucifer That They Have Been Played Like Puppets Season 2 Ep. 13 LUCIFER 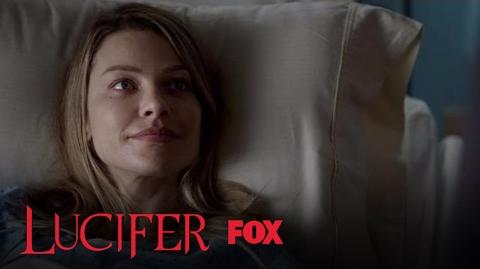 Dan And Lucifer Assure Chloe That They Will Find The Antidote Season 2 Ep. 13 LUCIFER 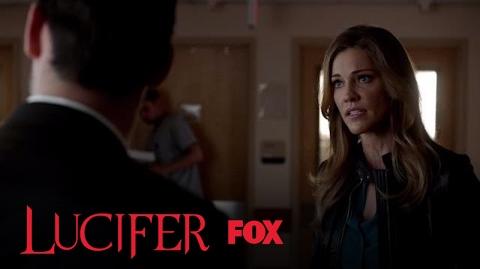 Charlotte Gives Lucifer An Idea On How To Save Chloe Season 2 Ep. 13 LUCIFER 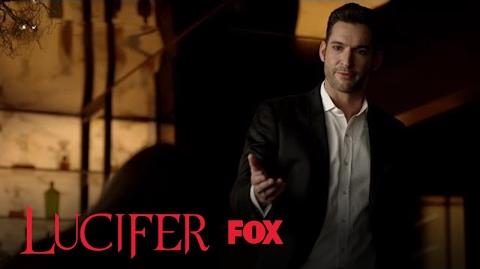 Lucifer Has A Plan To Save Chloe Season 2 Ep. 13 LUCIFER