Lucifer Wiki
Register
Don't have an account?
Sign In
Advertisement
in: Episodes, Season 3 episodes, Episodes where Lucifer says the title,
and 3 more
English

A Devil of My Word

A Devil of My Word

"Shocked by Charlotte's death, Chloe, Lucifer and the rest of the team work together to investigate and take down the killer. Then, Lucifer has an epiphany, Maze decides to mend a broken friendship and Chloe finally sees the truth."[2]

The episode begins immediately following the events of the previous episode, and the crime scene where Charlotte died. Lucifer says he can’t believe he'll never see her again. He says Chloe will be able to eventually, but Charlotte has gone somewhere that he can’t go.

Ella doesn’t have any leads and Dan is inconsolable. Pierce arrives and takes control of the scene, and he tells Dan to go home. When everyone disperses, Pierce asks Lucifer if he has seen Amenadiel, and Lucifer reveals the feather he found and speculates Amenadiel is back home in the Silver City, having taken Charlotte, Pierce seems oddly relieved.

Dan gets home and finds an empty house. He spots Charlotte’s coffee cup and her cases spread out on the counter. He also sees the waffle maker he bought her and he breaks down, smashing it into a glass table. When he goes to clean up the mess, he sees that she was working on a case investigating Pierce. He returns to the precinct and quietly tells Chloe and Lucifer Charlotte was investigating Pierce, that he was the Sinnerman, and must have killed her. Lucifer looks over the file and confirms Pierce is the Sinnerman, but they can't be sure he killed Charlotte. Dan is furious that Lucifer had kept that information from them.

Pierce addresses the force and says that they will find Charlotte’s killer. He fakes an emotional break, and Chloe knows that’s not like him, he doesn't get emotional. She now agrees that Dan is right, but he’s running the investigation. How will they take him down? Lucifer says Pierce is far more powerful than they know, and they must be cautious

Ella tells the group that they swept the scene three times before they found a cigarette butt with DNA from a man Charlotte was going to prosecute. It’s all too convenient. Chloe tells Ella to sweep again, to cover as Pierce comes in.

Maze is still being held by Pierce's men, and worried about Linda. She breaks free and fights her way though a dozen thugs. Linda is seeing a patient when Maze runs in with a knife. The patient runs out and Linda asks what happened. All Maze wants to know is if Linda is okay. She passes out when Linda confirms that she is.

Lucifer, Chloe and Dan go to talk to the hedge fund manager, knowing he is being fitted for a frame. He says he didn’t kill her, and they tell him they know. They find a planted gun in his desk and he realizes that they’re telling the truth. Someone planted evidence. They’re trying to figure out who would be repaying a Sinnerman favor, but everyone there has a dark past. Chloe then realizes that the culprit look squeaky clean. Dan realizes that the only person who fits that description is the limo driver. Dan rushes him, but Lucifer pulls him back and uses his mojo. The driver says that he sneezed and killed a motorcyclist, and the Sinnerman made it like it never happened, and as payback, he’s the one who planted the gun.

Dan meets with Ella, who thinks he needs a hug. Dan tells her he needs a big favor, and it’s a secret. Later, Ella is hovering outside Pierce’s office, and she tells him about the phone that Dan gave her, and a frame job. She tells a whole story about Dan saying people might be listening. Pierce is glad she came to him, and he promises that Dan is not in trouble. Pierce calls someone to say his officer is onto him, and to take care of it. A gunman shows up at Dan’s house, where Chloe and Dan capture him.

Lucifer goes to Pierce’s office and says he knows he killed Charlotte, and that it's time for a reckoning. He wants to know why. He tells Pierce that Chloe isn’t there, so he is invulnerable, then tells Pierce the story of leading a rebellion against his father, and that's how he got his Devil Face - thinks he gave himself his Devil Face. Pierce says his curse was lifted when Chloe fell for him but Lucifer disagreed, that it was when he fell for Chloe and did something selfless for the first time in his miserable life. She didn't love him. Pierce doesn't want to hear that, and says that Lucifer is vulnerable, that he wants to be good, and Pierce calls in the officers, saying Lucifer was trying to attack him.

Chloe and Dan are upset that Lucifer got into it with Pierce, but Ella says it wasn’t his fault, because she saw the smug look on Pierce’s face. Chloe calls Pierce, and he realizes that she's with Lucifer. She says they have the man he sent to kill Dan, but Pierce says the man knows they can get to his sister.

Maze wakes up in Linda’s office. She says she has to go, and that Pierce was right about emotions. Linda says that those emotions have made her strong. They hug each other.

Lucifer has a drink while Ella tells him how much she misses Charlotte, that she can’t believe Pierce killed her. She knows God works in mysterious ways, but she can’t find a reason. In a massive spurt of personal growth, Lucifer says he doesn’t think it’s God’s fault, he thinks that each individual is responsible for their own choices.

The man who had been captured by Chloe and Dan says he only cares about his sister Kelsey. If they can protect her, then he will tell them everything. Chloe and Lucifer go to get her. Chloe says this whole thing doesn’t feel right, and Pierce shows up and confirms that this is very much a trap. Chloe says that he doesn’t have to do this, and he agrees that normally he would not, that he's reinvented himself countless times, but this time – he has to kill Lucifer or be hunted forever. He says Chloe doesn’t have to die, and Lucifer tells her to step away. Chloe says she doesn't want to die, and she won't before she stops him, then fires at Pierce wounding him. She is shot in turn and collapses. Lucifer rushes to her side as Pierce tells his men to finish it. Lucifer’s unfurls his wings and wraps them around them both as a shield, as Pierce's men open fire, the wings are bloodied and damaged as Lucifer screams. When the gunsmoke cleared, Lucifer and Chloe are gone, only bloody feathers are left behind.

On the roof, Lucifer waits for her to regain consciousness, and tells her all that matters is she's safe. When she turns away, he vanishes, and she clearly begins to believe everything he's ever told her.

Lucifer, flying on bleeding wings, crashes into a window and takes out Pierce's thugs, using his wings as the weapons they are. When it is down to just him and Pierce, he painfully refurls his wings.

Chloe gets a calls from Dan telling her about the trap. She says they learned the hard way but that she’s okay. She thinks she has been avoiding the truth all along.

Inside, with Chloe at a safe distance, bullets have no effect on Lucifer. But Pierce has one of Maze's demon blades and they fight. Lucifer is again wounded, and says he promised to find a way to kill Cain, he then forces Cain's hand back and shoves the blade into Pierce’s chest, claiming “I'm a devil of my word!”

Lucifer laughs when Pierce thinks he’s going to heaven; Pierce is consumed with guilt over killing Charlotte, and that will be his punishment in Hell. With a malicious smile, Lucifer’s eyes start to glow as he tells Cain he can never out run what he's done; fiery light comes from Lucifer's face as his skin cracks. Cain laughs and say neither can Lucifer as he watches the Devil face return; he gives an evil laugh of triumph that Lucifer has come back down to his level and dies.

Chloe arrives and Lucifer's Devil face stops her cold, “It's all true.” 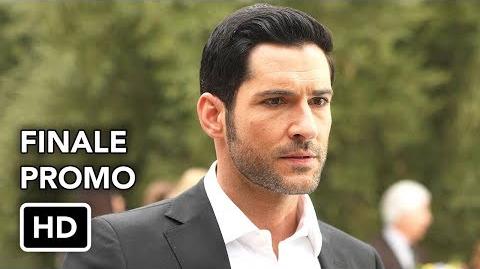 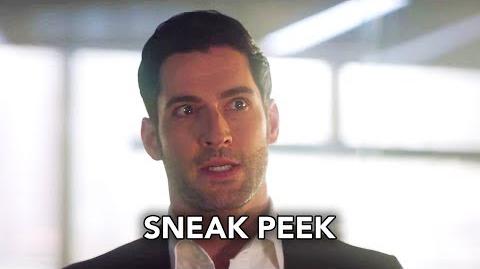